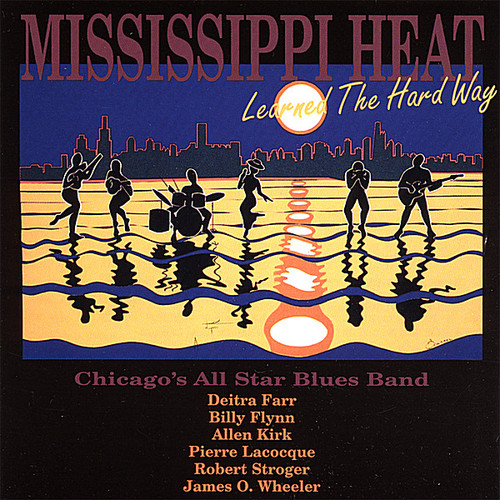 A Dynamite set. This is the band's second CD. LEARNED THE HARD WAY (1994) was pivotal in launching the band internationally. It received rave reviews from fans, magazines and festival promoters alike (see below). This line-up consists of Pierre Lacocque on harp, Deitra Farr on vocals, James Wheeler and Billy Flynn on guitars, Bob Stroger on bass, and Allen Kirk on drums. The same line-up can also be found on Mississippi Heat's third CD, THUNDER IN MY HEART (1995), also on sale at cdbaby.com. ********** Here is what the critics say: PRESS REVIEWS/QUOTES LEARNED THE HARD WAY "Listening to MISSISSIPPI HEAT'S latest album is the equivalent of taking a joy ride in a time-machine back to Chicago, circa 1950. ... Normally, when I hear that someone or some group is doing 'classic' blues, like they did in the old days, I'm a bit suspicious. If they have the emotions, they miss out on the musicality. If they hit the music right on, the human element is missing. But not with MISSISSIPPI HEAT. They fire on all cylinders and keep me coming for more." - SOUTHBEND BLUES SOCIETY "Here we go again blues lovers, CD number two from Chicago's MISSISSIPPI HEAT. This disc is one that is hot, mellow, blue and cool ... This album introduces the heavenly voice of Deitra Farr, a boatload of complimentary adjectives could be used to credit her singing, but all I can say is she casts a mystical spell that causes me to melt. ... Pierre Lacocque is always there, playing chords and smooth riffs that back up and snuggle all around the singers without stepping on anyone's toes. Then when he takes steps to the front stage to take his harp solos - Wham - a few hot lightning bolts of precision run right through with dead solid note action, or wailing with a little dirt all the while creating that killer tone that Chicago harp players are known for." - TELL IT LIKE IT IS (WISCONSIN BLUES SOCIETY) "Bandleader Pierre Lacocque has developed into a highly sensitive and innovative harmonica player in his own right capable of delivering powerful solos as well as riffing effectively as part of the rhythm section. ... (Pierre's got) a style that took it's influence from the creative use of tone as illustrated by the two Walters and refining the Jimmy Reed style of high and low note combinations, gradually developing an awesome technique that is as subtle as it is powerful, often building his solos in sustained single note bursts, always creating and rarely repeating himself." - BLUES LIFE JOURNAL "MISSISSIPPI HEAT has done it again. It proves ones again that it not only is keeping the blues tradition alive but expanding on it. ... One of the things you immediately notice about the stellar playing of Pierre Lacocque is that his is more of an ensemble effort than a harp player fronting a band. If you listen to Pierre's playing, you get the impression that with a coupe of swift blows he could overwhelm the band. But he doesn't do that, and that's what makes this harp player and this band different from many. You don't feel the harp is dominating the sound to the detriment of the players or singers." - AMERICA HARMONICA NEWSLETTER "If you like the Chicago blues sounds of the '50s you will have to have this CD. I can't praise it too highly, it's megastonking. ... All of (Deitra Farr's) vocals are sublime". - BLUES AND RHYTHM "One of Chicago's hottest straight-ahead blues bands, MISSISSIPPI HEAT, scores with LEARNED THE HARD WAY." - ILLINOIS ENTERTAINER "It is difficult to put together a blues band that is traditional yet original, but that's what MISSISSIPPI HEAT has done." - JAM MAGAZINE FRENCH REVIEWS "MISSISSIPPI HEAT, c'est ce qui est arrivĂ© de mieux a Chicago depuis le premier album de Lil' Ed and The Blues Imperials. ... Cette formation a le vent dans les voiles. Cette formation, il faut la suivre. Il faut entendre son dernier album, LEARNED THE HARD WAY. ... Si le blues a repris son droit de cite, s'il repris du poil de la bĂŞte, c'est grĂ˘ce aux musiciens qui composent le MISSISSIPPI HEAT. ... Ce groupe de musiciens forme en fait l'un des cinq meilleurs groupes de blues actuellement. ... FAMEUX" - LE DEVOIR (MONTREAL) "LEARNED THE HARD WAY est un indiscutable bonheur pour les oreilles avides de guitares rugueuses, d'harmonica brulant et de voix chaudes ... Deitra Farr est une extraordinaire chanteuse..." - LA TRIBUNE (SHERBROOKE, QUEBEC) "MISSISSIPPI HEAT mĂ©rite amplement qu'on s'y attarde. ... Pierre Lacocque fait partie des rares harmonicistes blancs qui ont pleinement assimilĂ© les leĂ§ons de Walter Horton, Little Walter et les deux Sonny Boy Williamson: puissance, ingĂ©niositĂ© et finesse dans la construction de ses solos, discrĂ©tion efficace dans ses riffs d'accompagnement." - JAZZ IN TIME *********** Check out other Mississippi Heat CDs and LIVE DVD on cdbaby.com For more information on Mississippi Heat and it's leader, harp player Pierre Lacocque, please refer to the band's website 'mississippiheat.net'. There you will find an interview with Pierre, CDs for sale, pictures of the current line-up, audio and video clips, a press kit, and quotes from the press and professional magazines. E-mail us at 'therealheat@hotmail.com'.
This website uses cookies to personalize content and analyse traffic in order to offer you a better experience.
I accept Learn More
back to top