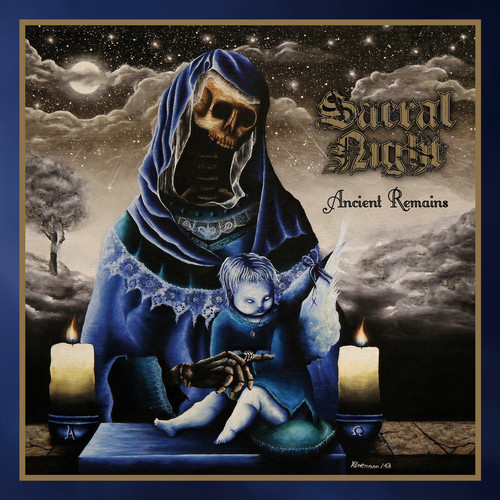 DISC: 1
1. Silent Night, Bloody Night
2. The Blood Spattered Bride
3. Ancient Remains
4. By Sword, by Pick, by Axe
5. The Last Decade and Beyond
6. The Hexer's Come
7. To Conquer
8. Unhinged Before Horror
9. The Cohort Rites

Once in a blue moon you come across a band that just escapes clear labelling and breaks out of most of the formulas out there. We've been really struggling to pinpoint the style, find comparisons and give an accurate description of Sacral Night's music. With the loss of the singer from the EP, the King Diamond similarities have diminished, but the sinister feeling and sense of the macabre have become even stronger. The vocal duties are now performed by the band's leader and bassist, Amphycion, who sang in his previous heavy metal band SANCTUAIRE - it's a passionate performance and there's a touch of melancholy in his voice. He's also known for having played in death/black band NECROWRETCH, and musically, Sacral Night sometimes dwell more in the death/black metal realm. There's tremolo style guitar picking, some disharmonic chords and blast beats, and one thing worth noting is the great, organic sounding drum work. All in all, an intense, unique and personal sounding debut album. Descend into the darkest catacombs, descend into madness... and let the heavy metal blackness embrace you. Check it out if you're into any of these bands: SANCTUAIRE (Fra.), ATTIC, BEWITCHED (Chl.), SATAN'S HOST, DISSECTION, IN SOLITUDE, early DEATH, TRIBULATION and early DEATH SS.
back to top