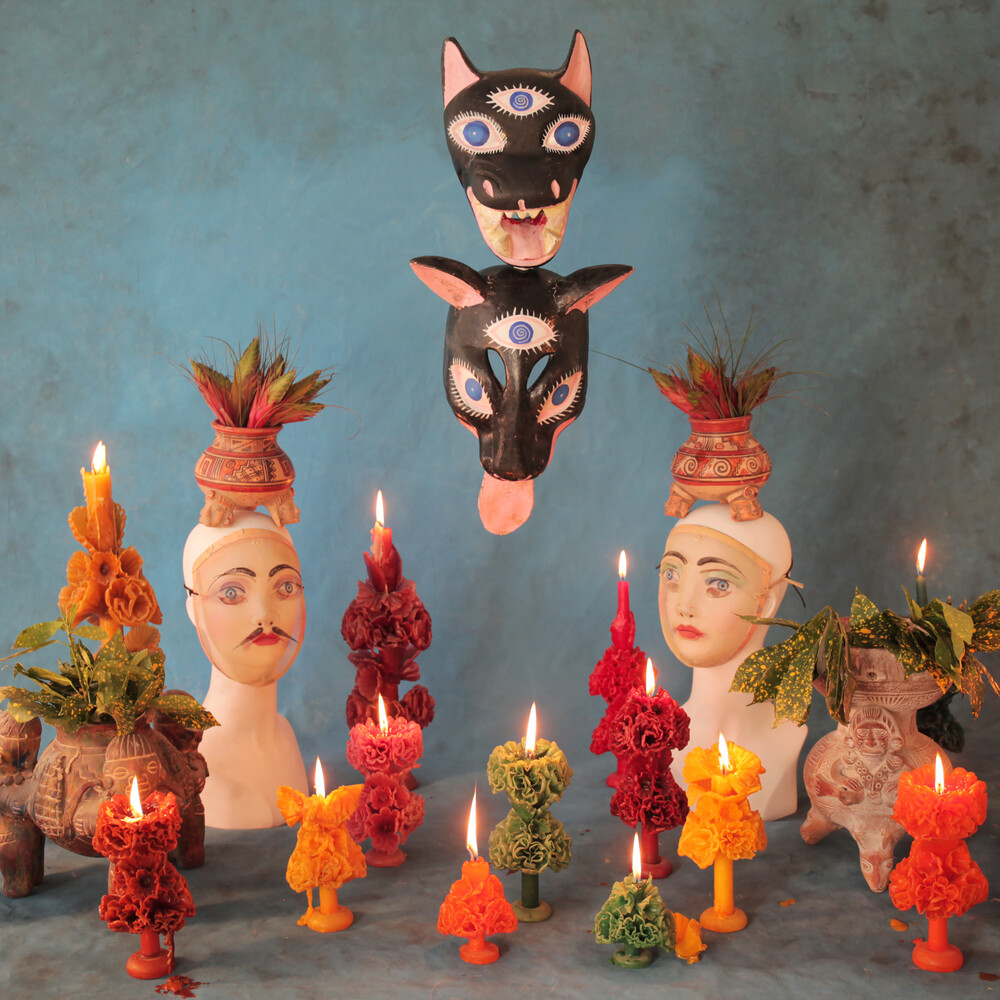 The double meaning of Brandon Valdivia's pseudonym Mas Aya neatly encapsulates his musical outlook. Over the past fifteen years, the Toronto composer, percussionist and producer has established himself as an integral part of the city's vibrant and varied music community through his membership in groups such as Not The Wind, Not The Flag, Picastro, The Cosmic Range, I Have Eaten The City, and alongside the GRAMMY Award-nominated Lido Pimienta, who appears on this disc. The Mas Aya moniker speaks to the interplay of the traditional and the exploratory in his work and refers both to the Nicaraguan town where his grandmother is from, and the Spanish phrase "el mĂˇs allĂˇ," meaning "the beyond." MĂˇscaras, Valdivia's fourth release since 2012, marks his debut with Telephone Explosion and first release on vinyl. It's easily his most colourful and expansive outing to date; nowhere else in his catalogue is the aforementioned collision of musical lineages and sonic discovery more evident.Like his alias, the album's title (Spanish for 'masks') embodies multiple significances. On one hand, it invokes the distinctive masks employed in both indigenous ceremony and Nicaraguan resistance movements (referenced in MĂˇscaras' artwork). On the other, it's descriptive of one of Valdivia's preferred compositional devices. In any given one of these pieces the focal point remains in flux-concealed even- as it's constituent ingredients dance their way in and out the foreground.MĂˇscaras is anchored by Valdivia's deft and atmospheric production style that folds together intricate spiraling synths, balmy environments, and crisp drum programming, variously drawing from trap, footwork, early Warp-label gestures, and the digital end of dancehall reggae. Yet it's his love of organic instrumentation that truly cements his commitment to an eclectic, unclassifiable aesthetic. Although he's well-respected as a drummer-particularly in wayward rock and improvised music circles-Mas Aya often serves to showcase Valdivia's prowess as a wind player. His iterative but expressive playing on tin whistle, bansuri, quena (as well as other instruments such as the llamador, and thumb pianos) imbues these compositions with a warm, tactile quality. Lido Pimienta's vocal appearance on "Tiempo Ahora" builds upon this human presence, steering things temporarily into abstract R&B territory. Meanwhile, the sampled voices that Valdivia threads throughout the first side underscore his connection to hip hop production tactics, while referencing key figures within current and historical popular movements in Nicaragua.Although the record is steeped in both rhythmic electronica and a wide assortment Latin American sounds both contemporary and ancient, according to Valdivia, aspects of it also reflect his training with with noted composer Linda Catlin Smith, whose lyrical quasi-stasis can be heard lurking in it's mesmeric, recursive structures. In addition to Mas Aya, and the previously mentioned bands, Brandon Valdivia has long maintained a constellation of potent collaborative endeavours. He's been heard alongside the likes of Laraaji, Tanya Tagaq, Sook-Yin Lee, U.S. Girls, Aidan Baker, Anthony Braxton, Michael Snow, Sandro Perri, and John Oswald. He appears on releases from Polyvinyl Records, ANTI-, Constellation, and Alien8, and has toured widely as both an accompanist and soloist throughout Canada, the United States, Europe, Colombia, and China. Valdivia is also noted for his original music and sound for theatre and has worked with important Canadian companies such as the MT Space, Red Snow Collective, Clay and Paper Theatre, Red Sky Performance, and Aluna Theatre.
back to top