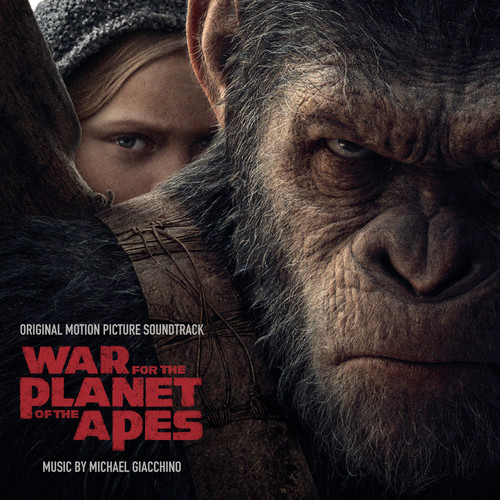 Original soundtrack to the 2017 motion picture composed by Michael Giacchino. In this installment of the Planet of the Apes franchise, Caesar and his apes are forced into a deadly conflict with an army of humans led by a ruthless Colonel. After the apes suffer unimaginable losses, Caesar wrestles with his darker instincts and begins his own mythic quest to avenge his kind. As the journey finally brings them face to face, Caesar and the Colonel are pitted against each other in an epic battle that will determine the fate of both their species and the future of the planet. War for Planet of the Apes stars Academy Award nominee Woody Harrelson as the Colonel and Golden Globe nominee Andy Serkis as Caesar. A graduate of the Juilliard School, Giacchino started his career composing scores for a number of successful video games including the Medal of Honor and Call of Duty franchises. In 2001 producer J.J. Abrams invited Giacchino to write the music for his television series, Alias and later the music for the hit cult series, Lost, for which Giacchino won the Grammy Award for Outstanding Dramatic Score in 2005. He went on to compose the scores for a series of Pixar films including The Incredibles, Ratatouille, Cars 2 and Up for which he won an Academy Award as well as a Grammy Award for the film's soundtrack album. Since then, Giacchino has maintained a busy schedule scoring major motion pictures such as Mission Impossible III, Cloverfield, Star Trek (2009), Inside Out, Tomorrowland, Doctor Strange, Star Trek Beyond and Rogue One: A Star Wars Story.