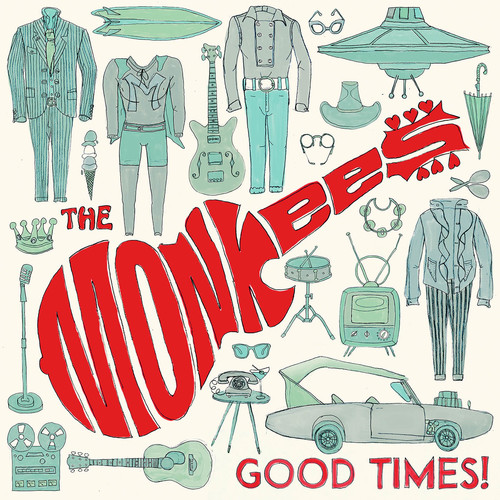 The highly anticipated new album GOOD TIMES! by The Monkees is the band's first new album in 20 years and tied to their 50th anniversary and extensive North American Tour. GOOD TIMES! finds all three surviving band members (Micky Dolenz, Michael Nesmith, and Peter Tork) taking turns on lead vocals, playing a wide range of instruments, and sharing new compositions. The unmistakable voice of the late Davy Jones is also included with a vintage vocal on the Neil Diamond-penned "Love To Love."

To produce the new album, the band found the perfect musical co-conspirator in Grammy® and Emmy®-winning songwriter Adam Schlesinger (Fountains Of Wayne, Ivy). Schlesinger also wrote "Our Own World" and co-wrote the album's finale with Dolenz, aptly titled "I Was There (And I'm Told I Had A Good Time)."

Much like The Monkees' early albums, GOOD TIMES! features tracks written specifically for the band by some of the music world's most gifted songwriters, including Rivers Cuomo of Weezer ("She Makes Me Laugh"), Ben Gibbard of Death Cab For Cutie ("Me & Magdalena"), Andy Partridge of XTC ("You Bring The Summer"), as well as a song co-written by Noel Gallagher and Paul Weller ("Birth Of An Accidental Hipster").

GOOD TIMES! will be released on 180 gram black vinyl.