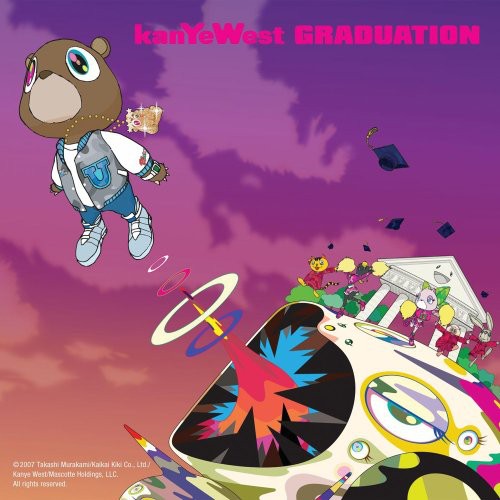 ''Graduation'' is the third studio album by American hip hop artist Kanye West, released September 11, 2007 on Roc-A-Fella Records in the United States. Recording sessions for the album took place during 2005 to 2007 at Chung King Studios and Sony Music Studios in New York City and at Chalice Studios and The Record Plant in Los Angeles, California. It was primarily produced by West and DJ Toomp, and features guest contributions from artists including Mos Def, Dwele, T-Pain, Lil Wayne, and Chris Martin of Coldplay. The album's cover artwork was designed by Japanese artist Takashi Murakami.

Inspired by Irish rock band U2 and other musical groups to make more inspirational, anthemic hip hop music, West incorporated synthesizer sounds into his production and dabbled with electronic music, while sampling a wide spectrum of musical genres. Lyrically, ''Graduation'' is more introspective in comparison to its predecessors, as West dedicated much of the album towards analyzing himself and conveying his ambivalent outlook on his newfound fame. It continues the college theme of West's previous two studio albums, ''The College Dropout'' (2004) and ''Late Registration'' (2005).

The album debuted at number one on the U.S. ''Billboard'' 200 chart, selling 957,000 copies in its first week. The coinciding release dates of ''Graduation'' and rapper 50 Cent's ''Curtis'' generated much publicity over the idea of a sales competition, resulting in record-breaking sales performances by both albums. ''Graduation'' received generally positive reviews from most music critics and earned West several accolades, including a Grammy Award for Best Rap Album. The album has sold 2,966,000 copies in the U.S. and has been certified double platinum by the Recording Industry Association of America. - Wikipedia